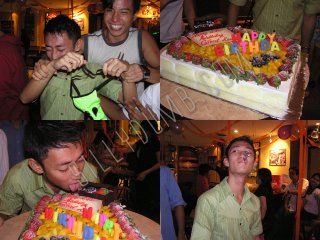 Gilbert’s birthday was quite impressive but costly for the thousand bucks spent. It was awkward for me at the beginning since Chua had told me to bring swimming trunk and I dressed up so causally for I thought it was something like a pool side party.

Being at the Toa Payoh SAFRA club for the first time, I still managed to find my way there. I didn’t really explore around but I felt the car park was as big as the buildings.

The party was inside kind of a lounge and the other small rooms on the same level were for karaoke. He had ordered a buffet at the door, which the food was quite pleasing to the tongue. He must have spent lots of time decorating the place with the ribbons hanging all around.

There were quite a number of entertainments inside like the karaoke with projection on a white screen and two television sets, the game machine and a pool table – more than any other party that I had been to, except for the swimming pool.

Nothing helped to relieve my embarrassment except the changing of my short shorts to a three quarter, but I was still the only one in slippers. Sometimes I just felt like hiding my face when they teased me with the only pool downstairs – baby pool.

Gilbert had invited his ex-classmates along and I was surprised to find a few of them quite pretty. Gilbert had all along given me this impression that he was a quiet guy and this time he amazed me once again – the first time was his ultimate different looks without spectacle, which he claimed that he wore spectacle just to hide his real self in camp.

Our other colleagues arrived as the party went on. I was bored as usual during the party since no girl was entertaining me. It was all the laughers and the innocent and caring faces, and also, Jianwei’s singing that kept me occupied.

Jianwei’s singing had impressed everyone that even Gilbert’s female friends had volunteered to sing dual songs with him. He seemed to be the star of the night and I admired him for his bravery and confident.

We had Gilbert surrounded and covered his eyes before we made him open his present. It was after some persuasion before he held the piece of cloth up. He was shocked when he opened his eyes to see the g-string.

I was fortunate to have the camera with me. However, I didn’t walk around to take pictures. It was awkward to be the only one in slippers and I didn’t know Gilbert’s other friends. Furthermore, the lack of knowledge of camera skill had prevented me from adjusting the setting to fit the dim lightings. (But I’m still glad that Jianwei has “employed” me as his cameraman for his birthday’s chalet and my aim is to take very good pictures of him and his girlfriend)

As the cake was brought out, I felt I should have done more things to lighten up the party since Gilbert’s friends seemed to be sporting – if only I had prepared.

Gilbert was so busy for the whole night that I hardly ha a chance to talk to him. It was until at a late hour that I confirmed with him that one of his distinguish gusts might be one of my BMT sergeant – 3SG Albert – one of the kind souls who I used to respect a lot.

As the night quieted down with the departure of some of the guests, the army guys settled down for the number guessing game. We ad some alcohol and the remains were for punishments. It was ridiculous that we had to pay an extra seventy bucks to open the bottle of liquor we brought along.

I wasn’t drunk, just felt heavy on my head. It was okay since little alcohol did make me feel happy but soon I was quite addicted to it.

We were reluctant to leave as Gilbert had booked the place until 2am, however, I didn’t want to waste money on cab fare. Ivan and I left before midnight but still missed the last train. We took bus 105 to Commonwealth where we decided to walk home.