Jianwei’s birthday chalet was good with so many friends around.

I went home right after booking out while Ivan, Fredrick and Reuben waited for Rehan at Lot 1. Rehan then drove his cooper down to pick me up, which took very long time as they lost their way. How could my house be so difficult to find when it’s located so near to town and just next to Chinatown and Shenton Way?

Anyway, I experienced how good a driver he was, but not to the maximum he could do. They told me how recklessly Rehan had driven all the way to meet me; unfortunately the road was so heavy from my house to our destination. I was so excited to experience how he managed to scare them and how he did turning at the speed of hundred and twenty kilometres per hour, drifting like playing the Initial-D game.

Rehan created excitements out of the worst situation by slowing down and then accelerate. The opening of the top of the car allowed wind. He did change lanes to the opposite one and back to the initial one just to overtake a slower vehicle. We actually lost our way.

There weren’t as many people as I expected at the chalet. However there were a few cute girls. As the rest of our colleagues arrived, we had more people than his other friends. The lighting wasn’t good and I wasn’t comfortable when I was taking photographs. I felt there was something more I could do to make it better, which I failed. 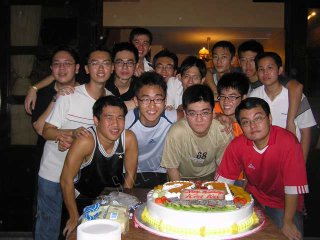 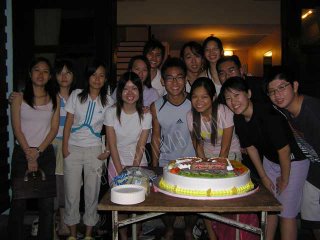 After cutting the 3.5 kilograms of cake, we had fun throwing Jianwei down into the pool. Some girls by the side were enjoying it. Jianwei’s friends left soon after that. I was quite bored when some of them were playing mahjong and it took very long time for Jianwei to get changed up and start to play game.

We played the Indian poker and it wasn’t nice when none of them wanted to change their cards. It was pure luck playing and not of wits and acting or sabotaging. Anyway, I was so lucky that I didn’t get to drink any. As almost all of them got tipsy, Gilbert joined in the drunken party and created lots of fun.

None of them really believed the doctor told me not to take any alcoholic drink. I didn’t mind drinking if Jianwei were to take the forfeit of kissing his girlfriend for three minutes for me to take photos. The pictures of Kaili and Peiqin kissing during his twenty-first birthday party were still inside my mind, seemed to put time on a pause till this day.

However, Jianwei didn’t really appreciate my good intention, or perhaps he was afraid that his girlfriend would be embarrassed even though she didn’t give any objection. I refused to drink.

As it got nearer to daylight at five, we started to doze off on the floor.