Facebook kept me occupied for hours. It was tedious to reply to the birthday greetings; and at certain point of time, the flood overtook my pace. I went to bed at 4am.

I managed to wake up on time. In the train, there was an insane uncle bothering me, asking me which camp I was from and he kept asking me to go to the cookhouse to eat. I realised Terry was two doors away from me at the opposite side. The uncle did not spare him. However, he moved away fast enough to end his torment earlier. Later on, Kang told us he was being woke up by an idiot and we knew he was the same person. I had overheard an auntie saying this old man loved to disturb people in army uniform.

I bought a hotdog bun for breakfast. It was an unusual day for there was a safety talk, which all of the NSmen were forced to attend as well. Basically, all except one shit point regarded us at the end of a talk. We had a boring discussion for the safety day before moving for lunch break. There was a mini birthday celebration and I had to be the centre of attraction.

I left camp earlier together with Terry since we had got the off pass settled. I logged on to Facebook and there were more birthday greeting for me to reply.

I dozed off in the evening and left for dinner with my mum and younger brother at 8pm after the channel 8 show. We went to Manhattan at Central. Gastric pain attacked me but our seafood platter came late. We had two glasses of drinks and they were pretty interesting. We walked to One Fullerton after the dinner instead of taking straight bus home directly.

After reaching home, I was surprised with a cake. The whole family was around to celebrate together. I kept myself busy replying to birthday greeting in Facebook.

I had lost count of the number people who greeted me. It was probably over two hundred of them. I was excited to see messages from people whom I thought would never greet me, on the other hand, I was disappointed to hear nothing from some good friends.

Best wishes to all the mums and hope you all won’t grow old so fast!

I did not SMS anyone with Christmas and New Year greeting this week since I’m trying to concentrate on work.

Wish all you people who visit my blog best of luck! 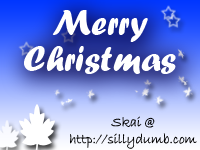 I had an enjoyable day slacking at home on Monday. It was a rare holiday and I knew I need to relax myself.

I managed to update some blog entries for August with pictures and I was pleased with the effort for the code generator which I did weeks or months ago for changing the images’ codes to my customised type within seconds. I was not able to automate the adding of water benchmark though.

I also had a few sessions of Condition Zero using the new nice monitor after testing around with the setting to realise that the software given simply sucked to the core. At a few occasions, my entire screen brought “Residence Evil” to reality. Luckily, with my familiarisation with changing the resolution for Windows XP, I was able to save the beyond-recognise display.

So much for work and fun, I almost forgot to drop my teachers greetings. I put my usual multitasking skill into good use, but was quite disappointed with my lack of focus on each individual task. Eventually, I missed out some of the teachers.

For those I still have your latest phone number, I have been sending you greeting messages on your birthday for the past donkey years.

I believe a simple message will help to lighten up your day. Even though not many people know my birthday, other than my volleyball gang, it does not really bother me. After all, we live to make others happy and we should not be yearning for any credit or rewards for things we do for others.

But for now, I’m sorry that I have been missing out some of your birthdays for the past few months. My body just cannot take it any longer and I’m always busy in front of the computer or dozing off like a soldier who just reaches home from a battle. I tend to forget to send the message.

This is part and parcel of life which most of us will eventually encounter. I fail to overcome because my time management skill is weak.

To people who have not yet started into the working life, please note that you may be busy right now with school work, you have to try to accomplish your dreams or self projects now, because in future, you will probably be even busier. You are expected to be committed in your work and it will not be the official eight to five or nine to six working hours stated in the contract for most of the jobs.

Nevertheless, I hope in some small corner of this busy and selfish world, some of you will still remember and think of me, despite the distance between us. I’m just too tired to talk at times.

For those who did not receive my SMS, just to let you know that Uncle Santa has instructed you to give me my present first. Later, he will put yours into your smelly socks. So, remember not to wash them first.

By the way, if you really never receive my SMS, probably I have sent to your old number. Please message me your latest number!

I hope they are really cute but most of all, they are from the bottom of my heart.

At least I get something in return, simply some texts, and that’s good enough.

There were so many different types of greeting messages for each festival and friends would forward them around so that I would receive duplicates. For me, I chose to be original and created my own. Then, I forwarded it to around two hundred plus number of people.

If you did not receive my message, please update me with your number!

Some friends replied me that they could not read Chinese even though they were Chinese, and thus I had done a translation of it to English below.

The fortune-teller foresees that you are lucky this year because you have a lucky star. I give him a big red packet “ang bao”, and he reveals the secret of the heaven – there is a cute guy born in the year of pig who is going to wish you “happy new year”. The red packet costs two hundred dollars and you can choose to pay me back by installment.

I received my first Chinese New Year card after so many years. The deliveryman was not from Singpost but my neighbour. The very inefficient postman had delivered letter to wrong unit again and luckily my neighbour took the trouble to pass it to me.

The card was from Huiying.

Anyway, she had promised to address her two younger sisters as her elder sisters “jie jie” so that I would address her as “mei mei”. Cool right?