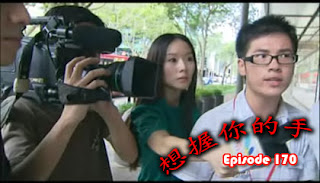 One of the saddest things that could ever happen is to get wasted in front of all the respectable educators, buddies and mentors who are bringing hopes to lives, simply for a person who does not appreciate at all.

Being a letdown is a sin and should go to hell – yes, I’m ready to.

None of my birthdays I would anticipate like this year’s somehow. I told myself it was either the best or the worst ever.

I began the night staying up with girlfriend since she was studying. I did not sleep for long just like any night. There was a meeting during lunchtime with nasi lemak provided and thus, Weitat and I did not go out for lunch with the rest. Dorothy was pressing me to go out for dessert after our meeting but I wanted to help Xiao Mei and Zaki with the SYOG trial run. I received my first present on the table, which was a gold pedal and I felt uneasy even though I was very close with the person.

I met up with my girlfriend at Choa Chu Kang, just nice to catch each other at the interchange. After waiting for her to get changed, we crossed over to Sunshine place to rent two movies. On the way, I was melted when she showed me her rings on the fingers, one was a heart shape and another four “S”, “K”, “A” and “I”. Next, we had a long sweet journey on bus 172 towards Jurong Point. After that we took the train down to my place. The “I” ring went missing on the train and we were so disappointed that we had not taken pictures.

Before we started watching the movies, both of us had dozed off. I had predicted it since we were totally deprived of sleep. However, I did not sleep for long. It was a simple yet enjoyable birthday spent with my girlfriend, which I was satisfied enough to witness her most natural looks, inclusive of weird sounds. Pigs were cute.

I managed to send her home again. Though the night was supposed to end very late, the timing was pushed early from 1am to 12am and finally to 10pm. I could not ask for more.

It was a fake love, but I enjoyed it.

The smiles of heaven; the cheerfulness of the morning sunshine; the beauty from the heart.
When all the ugly periods are over, the light shows the path to the paradise – take it and we seek for our happiness together.
Whilst we turn back and look at the unpleasant past, we begin to cherish what we have now.
Life is a learning process, we make mistakes and we hurt ourselves, but eventually we have to grow up and make the correct decision.
Am I your best choice?

Wednesday morning was a bad start of the day with a sudden changes requirement in the poster amendment. Though it was long anticipated with the previous experience, I was quite frustrated over the never-ending amendments.

I was in my new shirt which I bought during the previous shopping trip with Gilbert. Since it was more stylishly designed,

I attended the KO’s graduation party. It was an unexpectedly early celebration for there was still around three more months towards the end of their struggle. We had endless photo-taking sessions and two rounds of cake-eating sessions because Chun Leng was having his birthday.

Since the celebration stretched till after lunch time, and I had to grab a “bao” and “siew mai”.

The most frustrating thing was to receive an email regarding more amendments to the poster, which I felt all instructions should be given at one shot.

In the afternoon, we had a short badminton session. Since Weitat wanted to take a shower, Jingkun left in a rush first. Suddenly Weitat decided to go home directly but it was too late for me to catch Jingkun’s car since I was too tired to run anymore, and I did not want to dirt his car with my sweat.

On Saturday, Gilbert made arrangement to go to Marina South Pier. It was a busy morning for me since I had to rush down to the POSBank to buy cashier order to pay for my school fee.

I received two missed calls from numbers which were not in my contact list. Just as I was locking the door, I received another call again and I realised it was from Meihoe. Mr Ng had invited me out for lunch and I felt too pampered over it.

I arrived at the bank and was so fortunate that there was no queue. I tried to cash in a cheque but the bank teller told me I had to drop it at the box outside. Next, I found out about buying the cashier order and even though she told me I had to pay a five dollar fee, I did not want to waste my trip down. Next, I found out about the maximum purchase using NETS could be adjusted to $3000 per day and the maximum for ATM withdrawal was only $2000.

I went home to place everything back and gave Gilbert a call and he insisted me to put on the new clothes and shoes, and thus, it took me ages to get out of my house. I met him below his office and walked over to Keppel Road to take a bus towards Vivocity instead of Marina South Pier since the sky was getting dark.

We had our lunch at the Food Republic food court and I got myself the usual chicken chop but it was not as yummy as in the past anymore. The shopping trip started and I finally got to buy Gilbert his birthday gift. I also got myself a sleeveless shirt to make my collection four. Nevertheless, the stay at Topman shop was too long and exhausted me.

We took a rest at a new restaurant called Barcelos. My focus was on one of the staffs who looked like primary school kid as I remembered in the past, there used to be an age limit for youngsters to work part-time.

It was getting late and we had to call off the plan to the Marina South Pier.

On Tuesday, lunch was at Clementi. Jingkun took us to a duck rice stall and the amount of cucumbers at the bottom of the meat made the entire plate looked so big in proportion; nevertheless, everything tasted quite okay.

The greatest disappointment was seemed when George bid me goodbye once I got into the office. It was probably a good training for everyone to learn to appreciate him more upon his return, or perhaps, realise that the problems lay in themselves.

Alas, I learnt to ignore arrogant bitches in the afternoon.

Jingkun sent Desiree and I to Jurong East MRT station and I fainted on the bed soon despite telling myself not to take any nap in the evening.

This Thursday, George was on course and thus I worked alone. The class had a celebration for Liangquan’s twenty-first birthday and it was pretty cute for the rest of them to organise it for him.

After work, we started playing badminton again. Mingfa came down to join us. Since the previous days’ workout had totally drained my energy off, my body could not carry out my brain’s instructions. I started playing with the HPO colleagues since the other two courts were occupied and those tiring games further exhausted me.

There was volleyball session in the evening but I had to give it a miss since it was a last-minute one and the cramps on my legs earlier had advised me to give up. I waited for Daniel to take his bath before strolling to the MRT station together.